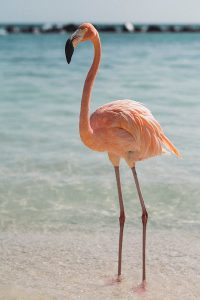 Before discussing the health and aesthetic benefits of supplementing the diet of your ornamental aquarium fish with spirulina fish food, we will first pose here a trick question: “What color is a pink flamingo?”

If your answer was “pink”—you’d be wrong. In point of fact, flamingos are naturally white. So what makes them pink? In the wild, these birds feed on a combination of blue-green algae and crustaceans containing carotenoids, which are naturally occurring chemical pigments.

So that being the case, why don’t you ever see a blue or green flamingo? The answer to that question is that in the process of digestion, the bird’s liver breaks down the carotenoids into smaller pigment molecules that are pink and orange in color. These molecules are subsequently absorbed into the bloodstream and then deposited in the flamingo’s feathers, legs, and bill. And that is how Nature turns a white flamingo pink.

For that reason, flamingos kept in captivity must be fed a special diet—one that mimics their diet in the wild—consisting of similarly colored crustaceans such as prawns, along with supplemental “pigmenting” additives (typically beta-carotene or canthaxanthin) so that the birds retain their distinctive coloration.

This Tale of the Flamingo serves to illustrate in simple form the complex biochemical mechanism that creates the equally distinctive coloration of reef and other ornamental fish—and why the serious aquarist or fish hobbyist must take special steps to ensure that the animals in their care remain so vibrantly colored in the artificial environment of an aquarium. One of the keys in accomplishing this goal is spirulina.

It has often been noted that we know more about the planets in our solar system than about the oceans on planet Earth. The sea, our ultimate source of life yet still so much a mystery, has fascinated human beings since before recorded history. In the modern era, one way we pay homage to that fascination is by setting up aquariums in our homes. The main reason we pursue this hobby is quite simple: fish are beautiful to look at. The sheer variety of fish shapes, sizes, patterns, and colors is endlessly appealing.

While not perfectly understood, this variety certainly arose out of evolutionary need. Take reef fish, for example. Why are they so prodigiously and gratuitously colorful? Unlike their rather dull-colored benthic cousins, who dwell in the deeps where sunlight does not penetrate (and so color is meaningless), a reef fish has excellent eyesight and can detect the colors and patterns of its fellow inhabitants. Therefore it must serve some practical survival purpose.

One theory is that bright coloration gives these reef-dwellers the advantage of camouflage in an environment that is equally colorful, allowing them to “hide” from predators in plain sight among multicolored rocks, corals, and sponges. Another states that coloration helps them identify members of their own species. In other words, color likely plays a role in providing the fish with a defense mechanism (whether as camouflage or as a warning to predators), attracting mates, and possibly even communicating danger and other signals to its schoolmates.

The Physiology of Fish Color

As with the aforementioned flamingo, the question of how ornamental fish display color boils down to a matter of genes, environment, and diet. At the genetic level, all fish have a basic “complexion” determined by the color of underlying bodily tissues and fluids. Beyond that, however, among all vertebrates fish have the largest number of color-producing cells—called chromatophores—in their bodies. In fact, they have seven distinct types of chromatophores:

Each chromatophore can actually produce several types of pigments; and it is the transparency of the scales and the thinness of the epidermis that allow the pigments show through the skin as color for display.

While it is true that the physical layout of an aquarium, including illumination, can affect a fish’s coloration, ultimately it is diet that has the greatest impact on its appearance. And that is where spirulina comes into play.

Spirulina: What It Is and How It Works

Whether the aquarium setup is simple or elaborate, the goal should be to reproduce as faithfully as possible a small simulacrum of the underwater environment in which your fish would normally live. Given the incomparable complexity of any natural ecosystem, this would be an impossible task in which to fully succeed. For that reason, specific interventions are required to promote the health and well-being of your fish. Primarily this would take the form of the food you give your fish.

Arthrospira platensis—typically referred to as Spirulina—is a naturally occurring blue-green algae, or cyanobacteria. Cultivated and dried as a fish food in spirulina powder, spirulina pellet, or spirulina flake form, this dietary supplement contains a nutritious mix of carbohydrates, fat, proteins, minerals, and vitamins.

More importantly, spirulina is a rich source of the essential nutrients required by fish not just for their survival but for their coloration. Much of a fish’s pigmentation comes from these nutrients, which are organic compounds they cannot produce themselves. One of the most important of these compounds is the carotenoids. Thus far some 600 different carotenoid compounds have been discovered.

One of them, called astaxanthin, is responsible for promoting reddish hues in the flesh and scales of ornamental fish; certain phycocyanins, on the other hand, are believed to contribute to blue coloration. Other key pigmenting compounds found in spirulina include beta carotene, chlorophyll, echinenone, lutein, xanthophyll, zeaxanthin, and others.

In other words: spirulina promotes in your fish a rainbow of redder reds, bluer blues, greener greens, yellower yellows, and so on. That is what you can expect from spirulina.

As if that weren’t benefit enough, spirulina also boasts antibacterial, antifungal, and antiviral properties. Thus, a diet of spirulina can boost the immune system of your fish while reducing the reliance on potentially toxic medications.

In short, spirulina is like a superfood for fish. Not only does it make them healthier, it makes them prettier. To coin a phrase: “Happy fish, happy hobbyist.”